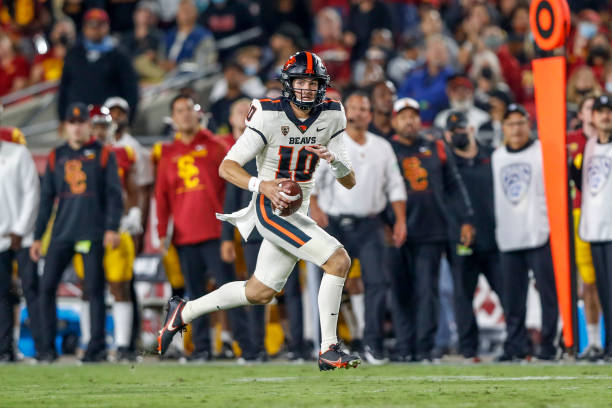 The first week of Pac12 conference play was exceptional to watch, consisted of some surprises and a few dominating performances. The biggest surprise had to be the way Oregon State handled SC.  The game was controlled by the Beavers from the beginning. Slovis, once again, disappointed on the big stage.  Now is not a time for a quarterback in LA to this poorly, especially with Stafford and Herbert in town. Expect to see Jaxson Dart under center as soon as he is healthy (currently is week-to-week).  It’s time for the true freshman to get the QB1 nod.

Arizona State, Oregon and UCLA did not disappoint last weekend.  Arizona State took care of business against a struggling Colorado squad, while Arizona played the Ducks close for three quarters. In the end, Oregon closed the game with 17 unanswered to seal the W. UCLA looked like the team we have been watching most of the season, Dorian Thompson-Robinson threw for two touchdowns and ran for two while committing zero turnovers in the 35-24 win. Utah came out this week with new QB1 Cam Rising after Charlie Brewer quit the team. Rising had a solid game, but it was TJ Pledger who led the way for the Utes, running for 117 yards and one touchdown on just ten carries. Washington still looks vulnerable. The Huskies lost control of a 21-10 halftime lead and escaped with an OT win over a weak Cal team.

BOULDER: The Buffs continue to struggle after the close loss to Texas A&M in week two. They were not competitive in losses to Minnesota and Arizona State. The Trojans are struggling to find their identity. Veteran QB Kedon Slovis has not been playing up to his potential, and true freshman QB Jaxson Dart remains week-to-week. Slovis will most likely start on Saturday. The Buffaloes have a chance to capitalize on this week’s game with SC off a shocking loss to Oregon State. If the Buffaloes want to go Bowling two years in a row, they need to win in Beautiful Boulder.

We will be watching for an upset here, but won’t move too quickly.  Most likely a popcorn game for us.

PASADENA: The winner here is your PAC12 South representative. Dorian Thompson-Robinson has been amazing at the helm for UCLA. Arizona State QB1 Jayden Daniels has been inconsistent.  We think Daniels plays to his talent level on Saturday.

Not betting here, but a must watch, DVR, popcorn game in the iconic Rose Bowl.  Although, in-running could be a play if Daniels is limited.

STANFORD: The third best team in the country will travel to the Farm this Saturday. Stanford has been been solid since Tanner McKee has been under center, but lost an important game to UCLA. They were returning from a trip to Nashville and a win over SC, so a mental letdown is understandable against a Chip Kelly-coached team.

Oregon Coach Christobal stated that his Ducks team has maybe never seen a quarterback like McKee and will plan accordingly. Top-5 NFL draft pick Kayvon Thibodeaux is expected to be a full-go after playing limited snaps against Zona. Oregon looks to continue their undefeated season. The Ducks are coming off of a win in which their defense had five interceptions. An injury to note for the Ducks is running back Travis Dye.

Popcorn only here, no in-running. A tough game for us to forecast

BERKELEY: Both programs are 1-3 heading into this week five conference matchup. Washington State has not won a game in Berkeley since 2013 and will look to break that streak this Saturday. It looks like starting QB Jayden de Laura will miss this weekend’s game, making Jarrett Guarantano the starter for a second week in a row. Washington State almost upset Utah last week, and California played Washington into overtime, eventually losing by a touchdown. Cal’s defense has been good this season, and with an injured Washington State offense as well as a weak offensive line, Cal should be able to take care of business at home on Saturday. Cal wide receiver Kekoa Crawford is out with an upper body injury after having a huge game against Washington.

Might be an in-running play here on Cal.  We’ll watch and wait.

Might make a move here if our early games cash

Utah has a bye this week to give their program time to digest the Charlie Brewer debacle and adjust their offense to Cameron Rising. Utah came off of a season-saving come-from-behind win against Washington State last Saturday.

Arizona played Oregon well in Eugene until the fourth quarter. Starting QB Jordan McCloud threw five interceptions in the 41-19 loss. This week will be good for Arizona to regroup and figure things out before a tough game against UCLA.