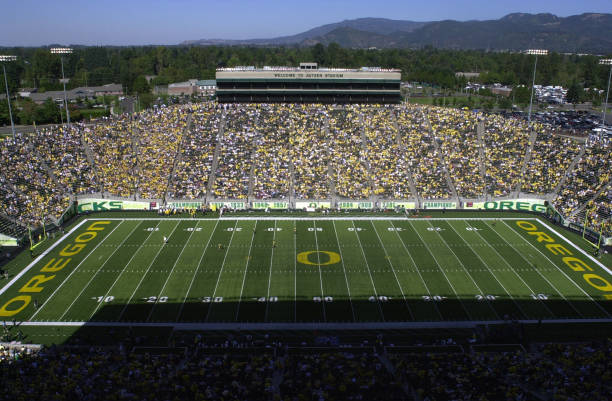 PAC12 football in week 10 consisted of some upsets and some big wins for programs who needed them. Arizona captured its first win of the season this past week, beating California 10-3. Michael Wiley had a rushing touchdown in the fourth quarter to give Arizona the lead and eventual win over California. Colorado defeated Oregon State 37-34 in double overtime. Brendon Lewis had another great performance for the Buffs, throwing for 170 yards and three touchdowns with zero turnovers. Jarek Broussard finally looked like the running back that Colorado had expected him to be running for 151 yards.

Utah dominated Stanford on Friday night, defeating Stanford 52-7. Utes’ running back Tavion Thomas ran for four touchdowns and 177 yards. Utah had 581 total yards compared to Stanford’s 167 total yards of offense. The two-quarterback system that SC tried to implement against Arizona State failed as the Trojans lost 31-16. Jayden Daniels wasn’t very productive at QB for the Sun Devils and running back Rachaad White ran for 202 yards and three touchdowns in the win for Arizona State. Anthony Brown had a tough outing for Oregon, but Travis Dye had yet another dominant week running for 211 yards and a touchdown. The Ducks won in a close game 26-16 and need to win out to make the College Football Playoff.

Due to an outbreak in COVID-19 cases, SC at California has been postponed. SC could definitely use this week off to address their quarterback situation, as it seems very ineffective for the Trojans to play both Dart and Slovis at QB. California is coming off of a bad loss to Arizona, and needs to address their offensive efficiency moving forward.

Oregon has fallen to the #5 ranked team in the country and needs to win out with convincing fashion if they want to make the College Football Playoff. Washington State is coming off of a bye week and has had extra time to prepare for Oregon. The Cougars have been very inconsistent this weekend, but QB Jayden De Laura and Washington State have shown the potential to beat any team in the conference. Anthony Brown had an off week, and if he can step up and play to his potential Oregon should not have a very hard time coming out victorious on Saturday. Running Back Travis Dye has been unbelievable thus far for the Ducks, and will look to keep pressure on the run game. Washington State is traveling to Eugene at Autzen Stadium on Oregon’s FieldTurf.

Saturday 11:00 AM (PST)
Utah -24
Utah is coming off of a monster win against Stanford this past Friday. Utes’ Running Back Tavion Thomas had a huge week rushing for four total touchdowns and nearly 180 yards. Arizona has not been good against the rush game thus far this season so look for Thomas to have another big game. Arizona finally got a must needed win, their first of the season against California this past Saturday. The Wildcats are going to have a tough time containing Utah’s offense this Saturday. The Utes are traveling to Tucson to play at Arizona Stadium on their FieldTurf.

Colorado is coming off of a big win against Oregon State this past weekend. The Buffs won in double overtime and will look to keep their momentum headed into their matchup against UCLA at Rose Bowl Stadium on their natural grass. Vontae Shenault is probable after appearing in his first game of the season this past weekend. Shenault provided a spark that was clearly missing for the Buffs offense, making big plays in stretch time. UCLA is coming off of a bye week and will finally get their QB1 Dorian Thompson-Robinson back. Colorado is coming off of two good games behind their QB Brendon Lewis. Lewis had a rough start to the season and is finally looking like the four-star Quarterback that Colorado recruited.

Arizona State is 6-3 and is traveling to Seattle to play the Washington Huskies on Saturday. The Sun Devils have been good this season, but QB Jayden Daniels has shown his inconsistencies this season. Rachaad White should have another big week, coming off of a 200-yard rushing game with three touchdowns. Washington has not lived up to expectations this season, and a win this week would help them get a bowl game and prove they can compete with anyone in the PAC. There are zero significant injuries to note headed into this matchup.

Oregon State and Stanford are both coming off of tough losses. The Beavers were upset by Colorado in double overtime this past Saturday, while Stanford got pummeled by Utah 52-7 on Friday Night. Stanford is a team that can beat anyone, they proved that by defeating Oregon earlier in the season. The Cardinal is 3-6 and could potentially land a bowl game with a win this week at Oregon State. Stanford will travel to Reser Stadium , which has been know as a tough track for visiting teams.